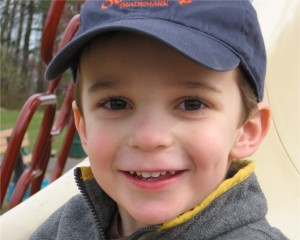 Kids on the autism spectrum have different reactions to touch. Some like firm touch. A soft, tickly touch can make them feel like bugs are crawling all over them.

Other kids think that a firm or (perceived) hard touch is hurtful. For instance, on numerous occasions, a classmate will walk by Liam’s desk through narrow rows, bump into him accidentally, and cause him to shout, “OW!” Or, my husband will grab Liam by the elbow or shoulder to “steer” him away from something or get his attention. The way Liam starts to yell and cry, we look around to see who is noticing how terrible we are as parents.

Some kids on the spectrum need people to respect their personal space. Imagine a bubble protecting a child, at least 12 inches in circumference. Getting into their personal space is threatening. It’s something the teacher or peer should talk with the child about, before “entering.”

Kathryn Erskine’s Mockingbird (2010), a fiction book about a female character (upper elementary age) with Aspergers, has a great chapter about “Personal Space.”

“I hate recess even though Devon says it’s supposed to be my favorite subject and there is no recess once you get to middle school so enjoy it now. But I can’t enjoy it because I’m surrounded by sharp screaming and it’s too bring and people’s elbows are all pointy and dangerous and it’s hard to breathe and my stomach always feels really really sick” (p. 26).

You shouldn’t get in someone’s Personal Space.

What’s it to you?

I don’t know what that means so I say again, You shouldn’t get in someone’s Personal Space.

He puts his hands on his hips and his nose wrinkles up, What of it?

Liam is what’s known as a close-talker. He is very touchy and doesn’t respect personal space, unintentionally. He has been known to touch teachers (not recommended), teacher’s desks, others’ everything – mostly without really intending to or meaning any harm. This tendency has definitely gotten him into trouble and made others feel a bit uncomfortable.

I can empathize. One of his dear friends from very early on once was so excited to share something with me that he greeted me with both hands on my chest. Knowing that he was too young to understand why this was wrong, I just moved his hands into my hands and continued listening to him excitedly share his news.

Liam’s therapist once shared a strategy with him that worked well. Liam loves video games (as I have mentioned), so she shared with him to not be a “space invader.” She taught him what was too close and what was the just right distance for talking and playing with others. It was very helpful be able to say to Liam, you are being a “space invader,” in a given situation; he would immediately take a step back and apologize to the person he was “invading.”

Selfishly, I really enjoy having an almost 14-year-old that is still affectionate. I know these days will not last forever. I will take all the hugs and heads on my shoulder that I can, while they are still being offered.