I’m going to write about Kieran only this morning. Remember, Kieran is showing signs of ADHD. We did not know at the time about the ODD, but looking back he did exhibit signs.

Here is a chart of other “disorders” that can be co-morbid with ADHD (http://www.adhd-institute.com/burden-of-adhd/epidemiology/comorbidities/): 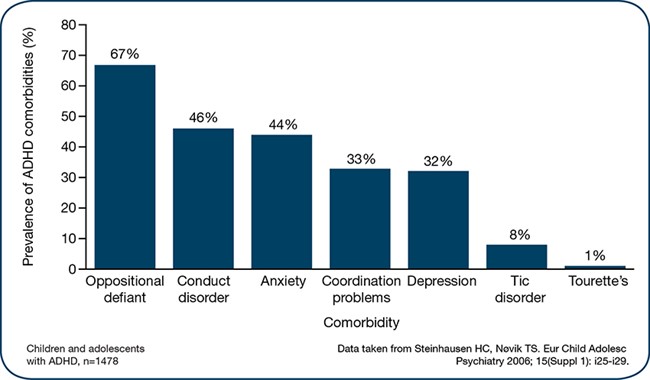 What we saw was aggressive behavior when he became frustrated.

Kieran, to this day, gets very easily frustrated. We only rent his trumpet because I wonder every time he gets a new piece of music if the instrument will survive his wrath. He invariably will start to bang the trumpet on his leg, take it apart, and then lubricate every inch of it. This past time, however, we had a mini-breakthrough in that we reflected on how frustrated he was upon getting his winter concert music, but learned it so well that he had a successful concert. It seemed to click that, if he just took one line at a time and practiced daily, he would indeed improve. AKA, he didn’t need to play the piece perfectly, all of the way through, the first time he practiced it. There was a little less banging and oiling this time around. Concert music has yet to be handed out, though.

Early on, Kieran also became frustrated, as many other kids do, when he could not express his thoughts and feelings quickly or adequately enough with his limited repertoire of words. He is still more apt to punch or kick Liam if he is losing a game, than eloquently share that he doesn’t like losing.

When Kieran was still in the infant room at day care (the same day care that wanted to hold Liam back, interestingly enough), he started to become frustrated with other kids who would: take his toy, invade his space, not play the way he wanted them to… anything that annoyed him, really. He started biting, just one or two times. The director’s recommendation was to move him up to the 1-1/2 year old’s class. He was about 13 months at the time.

We trusted her recommendation and Kieran seemed to immediately settle down. He was so in awe of the “older” kids – what they could do, how they talked, the new games and activities they had, that he stopped misbehaving. He could do and play the way they did, and his language increased daily! He didn’t become as frustrated.

It was the first time that the word “bored” had been used with him. I do think that this word can be used an excuse at times, that we should teach our kids that it’s okay to be bored – it’s a part of life, and/or that it’s an overused term, especially with gifted kids. But there he was, enjoying life – being challenged in a positive way. No more biting (for now).