Structured thinking/graphic organizers support weak central coherence because they build upon the strength in visual memory that many students on the autism spectrum have. They show students what material to attend to, and which to suppress.

The following “Inference Equation” chart can be used with students in fourth through eighth grades. I have seen reading specialists use this technique with their students, after modeling how to fill out the information with a familiar text (I Do), having students work in pair to analyze a current text (We Do), and then having them work individually on their independent reading text (You Do).

I appreciate how this support has students provide textual evidence for their thinking. This connects in the student’s mind, what the author wrote, and how they thought about it (through their own experiences) to create an inference.

I have written previously about how Liam enjoys helping others with math.

Kieran’s fifth-grade year was a great year to see that help in action.

Kieran does well in math, but when he doesn’t initially understand a concept, he shuts down.

Liam was consistently able to “bring him back” to an understanding and calmness so that he could finish his nightly homework.

He is still doing so to this day.

Around the end of second grade, we asked him to help Mea, at least to check her work.

She understanding math in a very different way. There were many times that her dad could not help her understand the “new math.”

Liam has always been able to.

Now he’s been helping both Kieran and Mea with their instruments, although different from his own.

He will play a song for Kieran so that he can hear the notes and rhythm.

Now, he is actually helping Mea play two instruments that are different from his own.

Last night, he held her music for bells for her, and kept time, humming along as she played. She actually practices for about 40 minutes with his help, replaying a song until she gets it right (she just picked up bells, so is about six weeks behind her peers).

While he once said that he thought that teaching was too hard a profession to pursue, I see him having the heart of a teacher, nevertheless.

Track was not as successful an experience for Liam.

First, it was extremely cold.

Then, there was a lot of downtimes.

He wound up trying to talk with the coaches during the meet.

He also wandered around where he shouldn’t go, not having a group to hang out with.

Finally, while he likes running long distances, he is not fast.

In one race, runners were passing him on their way to the finish line.

Afterward, I overheard a student say, Liam, run much? then laugh.

Thankfully, he noticed that track was not an overly positive experience and decided that he didn’t want to participate in the future.

We were proud of him for taking a risk but also knowing what wasn’t working for him.

In seventh grade, Liam performed well in his local MathCounts competition. He even made the newspaper:

He was the first place seventh grader and second place finisher overall.

He seemed calm and excited about his work. He prepared diligently for regionals…

Where he came in 11th place.

One place out of the top ten, where competitors go on to compete in the countdown round.

In his quiet, humble way, he noted how he had done so much better than the year before locally and was up three places from regionals from the previous year.

He said he enjoyed his first try at countdown round (locally), which he had not been able to the prior year.

He was proud of his team. He congratulated them all, as his arms were full of awards.

And that was it.

Time to turn his attention to track.

He replaced the previous year’s medals and certificates hanging in his room with the new ones and was happy.

He taught us a lesson about how to be content with hard work and effort too, despite the results (which were much to be proud of).

Another graphic organizer that I have seen teachers use is the one below: 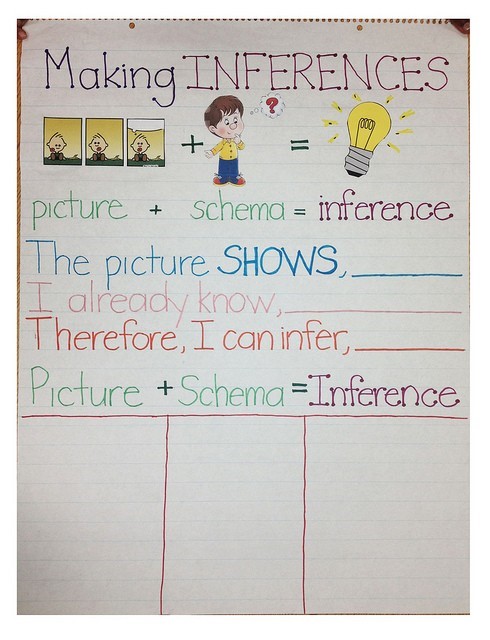 This is why showing a student how to activate their schema is essential to teach before inferencing skills can be imparted.

The teacher needs to walk the student through the steps of using this type of scaffold, followed by a gradual release of responsibility, through an I Do, We Do, You Do process.

I introduce to all students that making an inference means analyzing the picture for what it shows, adding what we already know about the topic in our mind to equal an inference.

I would start the I Do with a previously read text, familiar to all of the students, to show how to make an inference—probably an inference that was made before with the students, during the teaching of that text.

In the instance of the butterfly text I used with the second grader, I showed him the diagram of the life cycle of the butterfly and then list the different things that I knew about the topic: eggs are “baby” animals before they are born; arrows tell me which way to go in a diagram; if the arrow keeps going, it means that the pattern repeats itself, and so on. Then, I said that I think the circle is important to the butterfly’s life because it starts all over again, as an egg, and has no end, just like a circle.

During the We Do portion, I would use a text that is also familiar and do much less of the talking so that students can lead the process. I do not forget the You Do part of the process because this is how I would formatively assess if the student understands the steps and how to inference on a straightforward text. If not, we go back to the previous steps. I can extend their practice by introducing more texts that will help the student problem solve (the issue of inferencing) in a text.

Making inferences will be a skill that students on the autism spectrum will need to practice consistently each school year. This is true of many of our young learners. Students will learn to acquire the skill of inferencing; it will take consistent guided practice as texts grow in complexity, to internalize the process.

Another resource for students to learn how to inference comes from Kylene Beers and Bob Probst’s Notice and Note (2012; 2015) signposts.

For both fiction and nonfiction, students are guided to find “contrasts and contradictions” from what they have previously read.

With an information text, the reader is being asked to notice and note when the author presents information that is different from what the student knew or thought, or shows a change between things/people/ideas. The reader is then asked to stop and wonder about this difference.

Kieran’s brain is different from most that I have met.

He stretches me to accept unique ways of thinking about and doing things.

For example, since about fourth grade, and ever since, Kieran has read at least three, and up to five books simultaneously.

Test him on his understanding of these books? He passes with flying colors.

Complain that he should be reading one book at a time? He will stop reading.

I think that this way of reading keeps him from losing interest. If his interest is waning, he switches to a different book for a bit.

I’ve learned, instead of criticizing his habit, to recognize it as his way and show him respect.

He is some reader, after all.

Learning from the best!

Trying out some firsts (martini and Uber).

Planning for the future.

Thank you to Stacey Shubitz and the Slicers, Stenhouse Publishers, Rose Cappelli, Lynne Dorfman, Clare Landrigan, Tammy Mulligan, Paula Bourque, my PCTELA family, and many authors and speakers for making this year’s trip to St. Louis an incredible learning and inspiring experience. 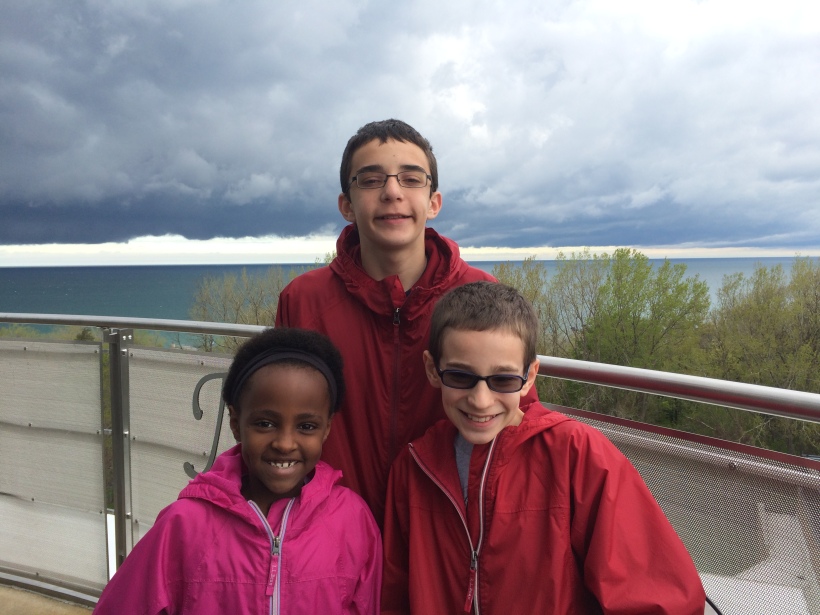 In seventh grade, Liam had the opportunity to advocate through writing about a cause in which he believes. He wrote and presented about Cure International, an organization that raises money to pay for operations to cure curable conditions in children overseas: https://cure.org/. This blog is actually not about his topic, however.

His teacher contacted me one afternoon during presentations.

One of Liam’s classmates had chosen to discuss raising funds to cure autism.

She shared that Liam had raised his hand politely after the presentation to say: if there was a cure for autism, then I wouldn’t be who I am.

She shared with me how well he spoke about himself while respecting the opinion and work of his classmate.

The fact that he shared this in front of the class floored me.

I feel the same way about him and his autism.

Inferencing is a literacy skill that students on the spectrum find particularly challenging because they have a difficult time with tasks that ask them to consider associative meanings or recognize relationships and common features.

To help, just like with main idea and detail questions, teachers should use explicit modeling, scaffolding, and providing direct feedback to reinforce correct answers.

Teachers, likewise, want to place a student with ASD in a reading group where they can hear a “more knowledgeable other” infer aloud in a conversation. Again, teachers should use the think-aloud strategy to model their own inferencing process.

Students on the spectrum are not used to thinking about larger constructs or themes. They need a teacher or peer to help them learn what to notice, understand how to consider all of those details, and to decide how they all fit together.

Returning to graphic organizers, there are many that will support readers who struggle to identify the key pieces of information that would help them make an inference.

The Common Core Standards in this section ask that students do a lot of comparing and contrasting.  There are many compare/contrast and similarity/difference graphic organizers available. The teacher should choose ones that she likes to work with best.

A unique one shared with me by Eric Shipman, a third-grade teacher (http://www.bath.k12.ky.us/docs/Graphic%20Organizers.pdf – see Compare/Contrast with Summary). He appreciated it for the same reasons I am mentioning it here: it explicitly identifies the categories that are to be contrasted. Being able to target specific information to contrast (i.e. food, habitat, predators), is more beneficial than just tasking a learner to compare and contrast two animals. In what ways? About what? This way, the teacher can provide additional guidance for how the students should organize their thinking around the task.

This graphic organizer caught our attention because it added an additional layer of support to the typical compare/contrast strategy. In reality, Mr. Shipman and I found this to challenge students because it deepened the thinking beyond comparing and contrasting appearances or other lower level information. Then, it helps the student with ASD because of how explicitly it directs them to categorize the information garnered from the reading.